The Shandog Province offers incredible insight into the history of China as well as a fine opportunity to hike among splendid mountains, clean(er) air and abundant forest landscape.  It is probably off the Western tour radar for many reasons. Those wishing to stick to Beijing, the Great Wall or Shanghai will not be found here.   To be completely real, I can count on about one hands how many Westerners (white people) we saw during our travels.   My kind of place; a nice escape.

Qingdao is a modern sprawling city that sits in a nice area on a peninsula into the Yellow sea.   This land has changed rulers many times. This place has been the capitol of a Chinese Empire more than two thousand years old. It has also been occupied via invaders, surrendered to outsiders after wars, bombed by Japanese just to name a few transitions. The actual buildings are incredibly noted for the German concession areas of influence.   They include numerous churches, cobbled streets and nice trees.   This is also the home of Tsingtao beer; China’s most famous beer.   Confucianism and Buddhism aside, that is good enough for me!  On the road we go!

We are on our way on the high speed rail. 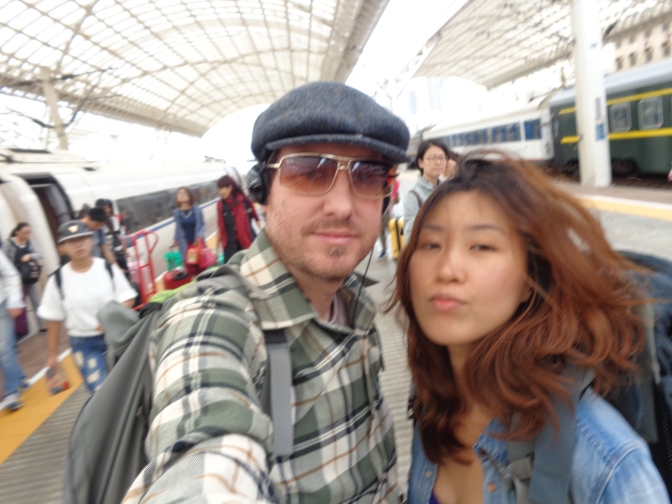 I have to say I was really impressed with using AirB&B.  It is kind of like Couchsurfing.com, except you are actually playing for a place/services and keeping out of typical bullshit tourist hotels and traps.   We landed a nice place just a bit west of the main train station.   I believe we were next to one of the major bus depots in the city. 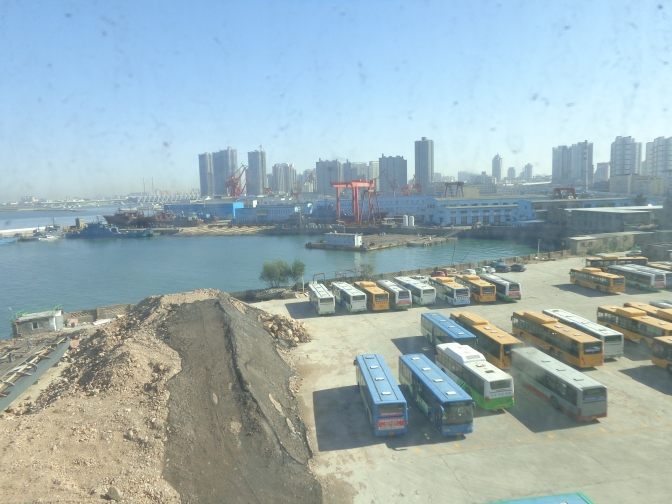 After a day of train travel, our belly’s were seeking food.  We found a fine local restaurant to enjoy the local beer and culinary experience.

Qingdao is known for it’s concession era architecture.   Here is a quick look at the types of buildings that are very common around these parts.

What is really crazy about this place is the beach life.   No, this isn’t San Diego nor is it Isle of Palms or Folley Beach.   Chinese have their own strange beach culture.   You might see a few people swimming (courageous young men, usually) but there is no bikini show.   Crabbing for little hermit crabs seemed to be the most popular beach activity. 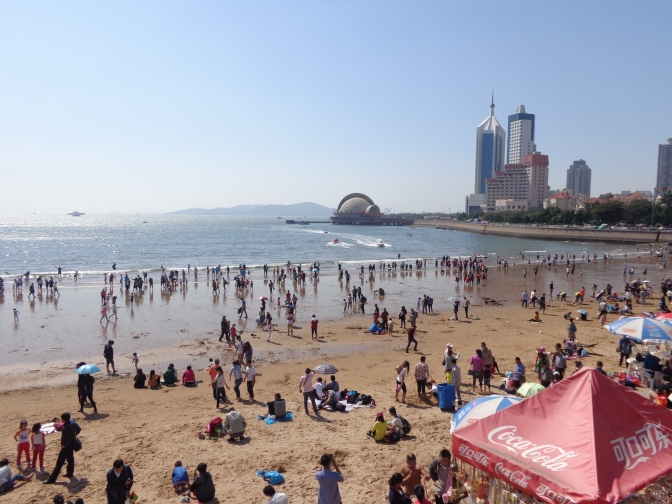 Look at all the people.  It was overwhelming! 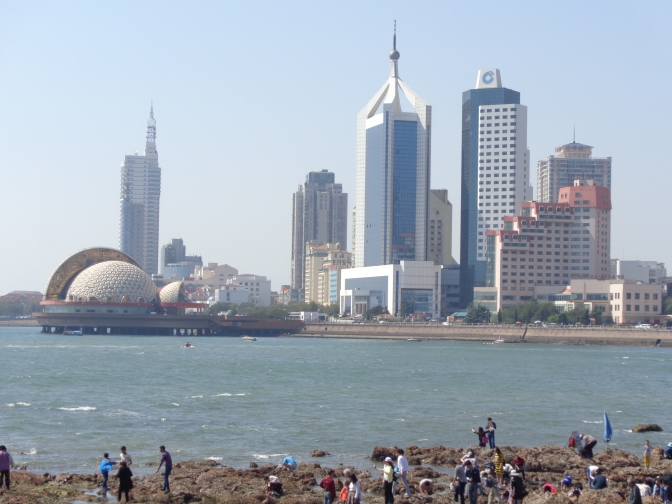 The Tianhou Temple is a small restored temple that is dedicated to the patron of seafarers.  It has stood near the shore since 1467.   Aimee and I had a fun time getting our coins into the temple shrines. 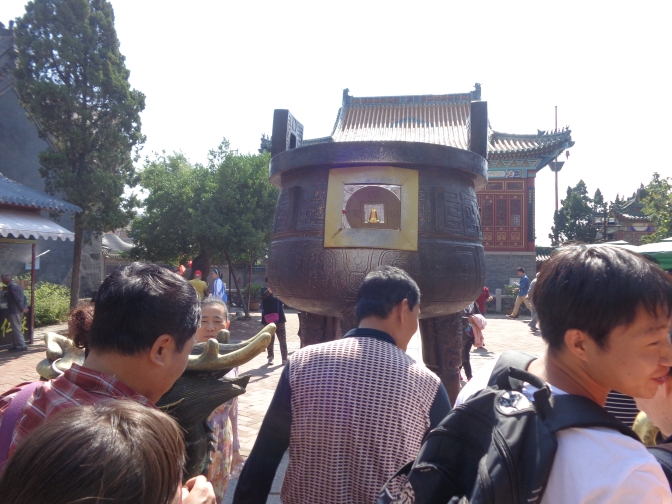 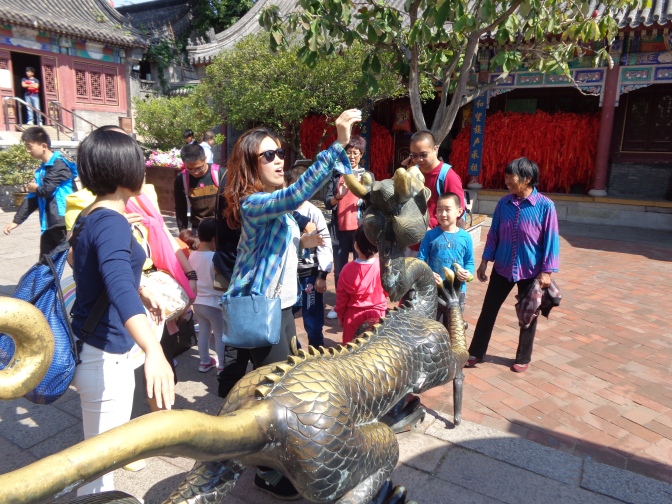 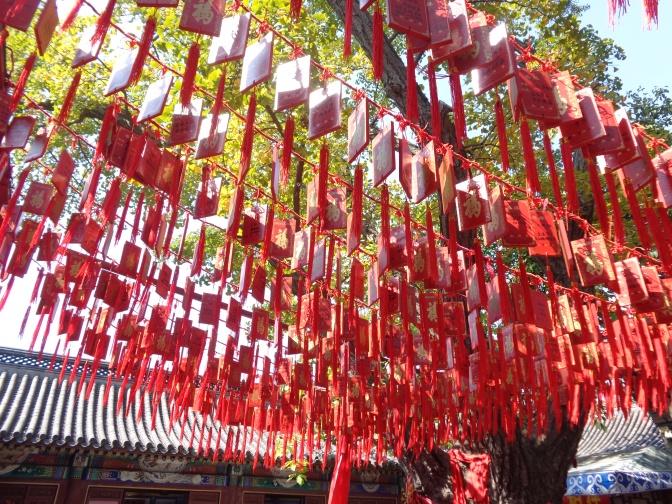 Lots of money in those aqua coffers! 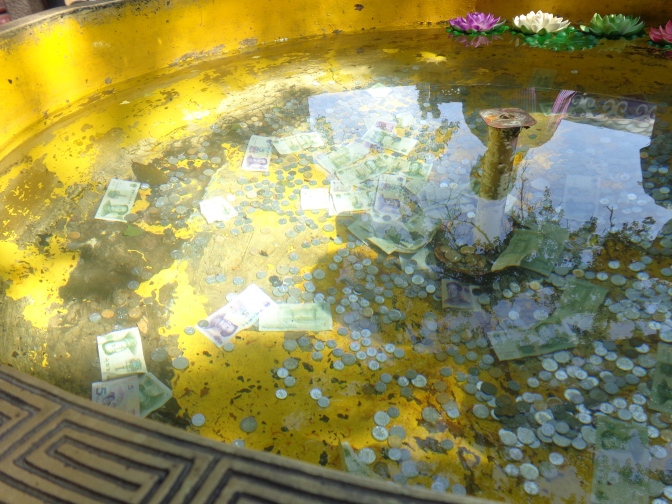 Here is a typical Soviet-influenced era type architecture that you will find throughout the area; especially in government buildings.

With it’s invaders, crusaders and missionaries that have existed since, well, church was church, Qingdao has it’s fair share of churches.   This is a beautiful church that was built in 1908. 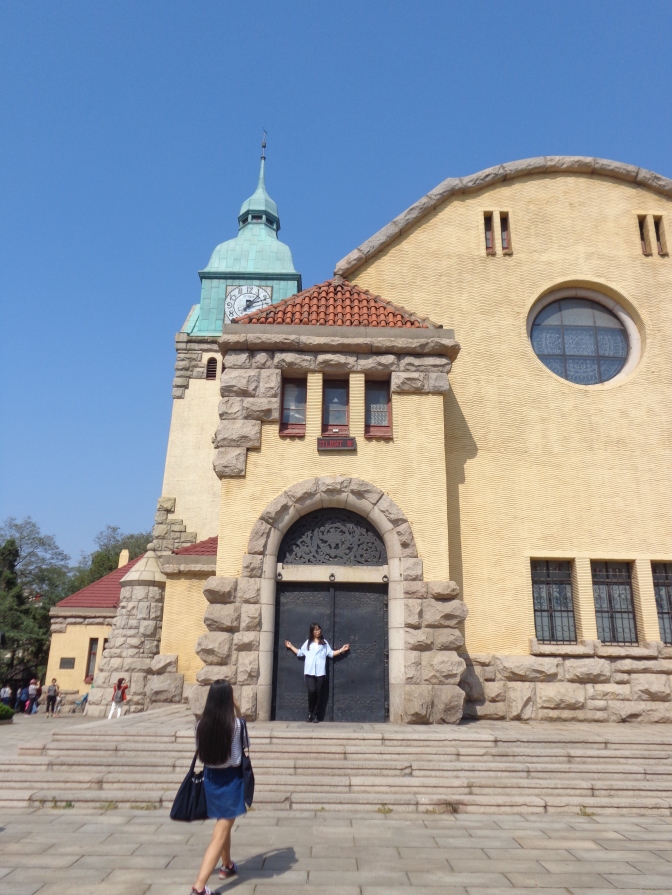 Yes, they take offerings everywhere.  Even in China.

More tourists than parishioners, but hey, what they hell.   Click and shoot. 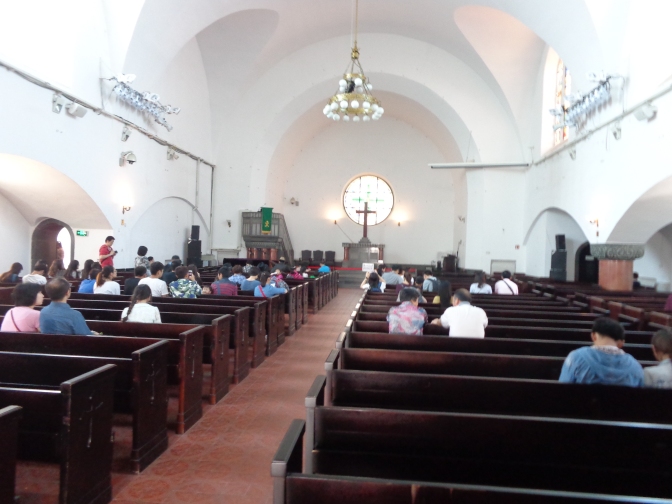 The governors mansion was really cool.  It was built for the German governor in the area at the cost of 2,450,000 teals of silver.   In 1957, Chairman Mao stayed here with his wife.   The building is very Jugendstil, a form of German art nouveau with some Chinese flare. 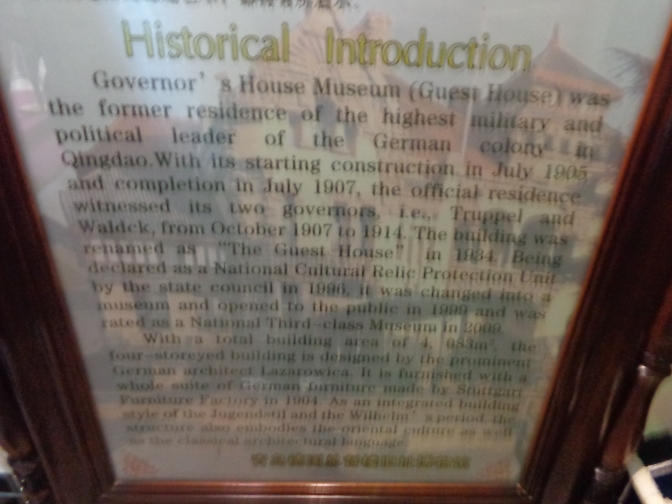 Time for dinner.  Seafood is the specialty in this area.  Pick your seafood, any seafood from the tanks. 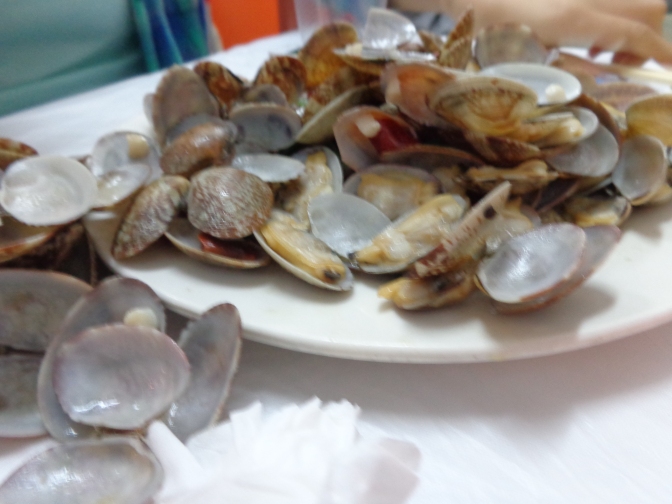 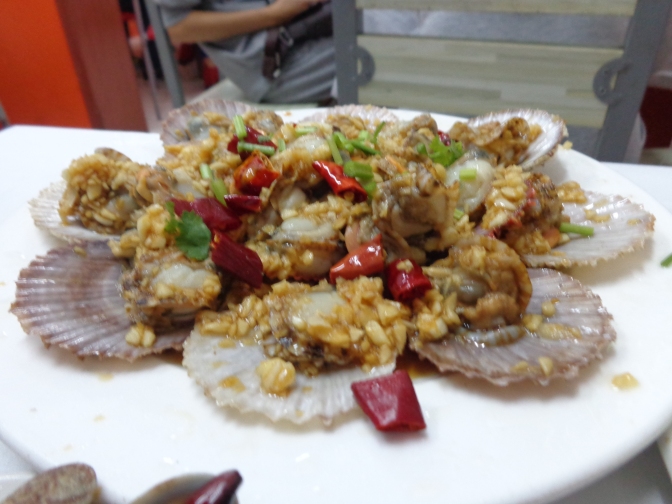 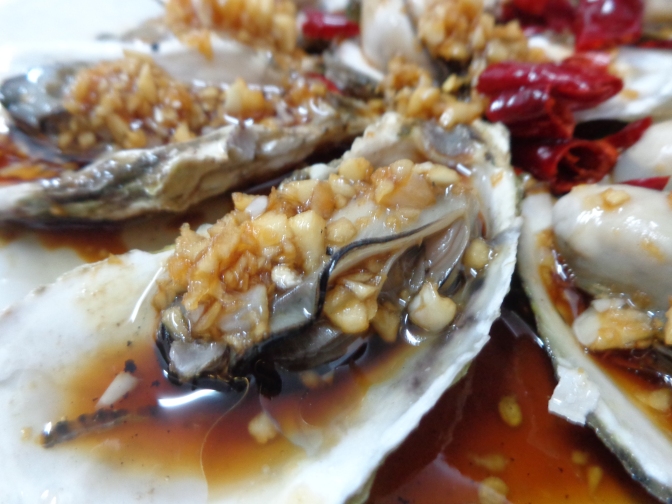 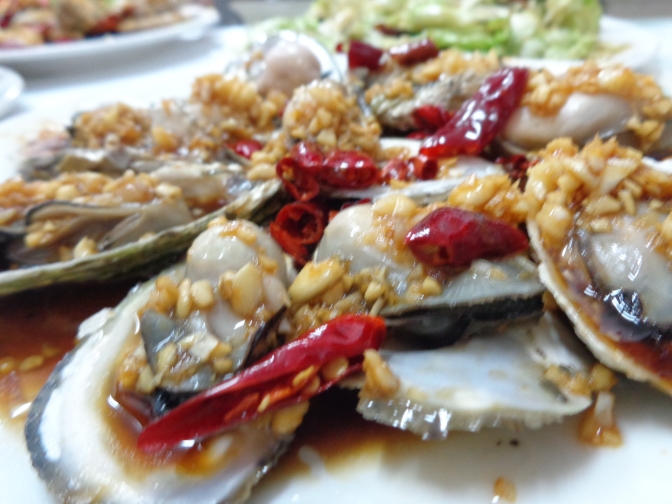 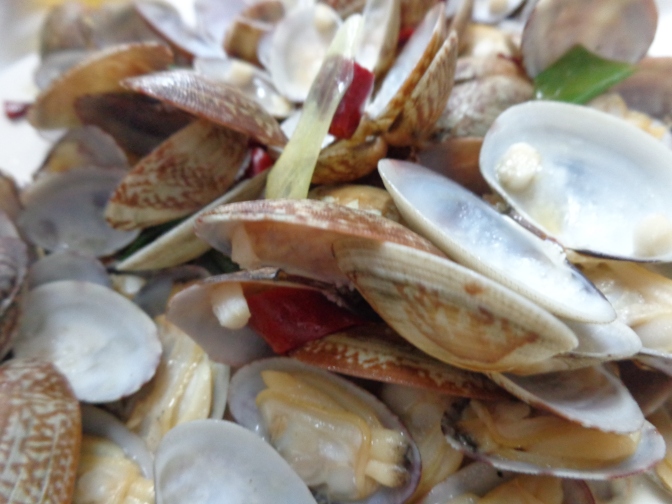 Lao Shan is a short distance from Qingdao.   It has nice trees, trails to hike and mountains that have historical importance to Chinese History.  In his quest for immortality, Emperor Qin Shi Huanng ascended these slopes and the Buddhist pilgrim Faxian landed here upon returning from India in the 5th century with the first set of Buddhist scriptures.   There are many temples to explore, natural springs and some of the best hiking that I have done yet in China.   Our area of focus was on the East side, the Yangkou Scenic area. 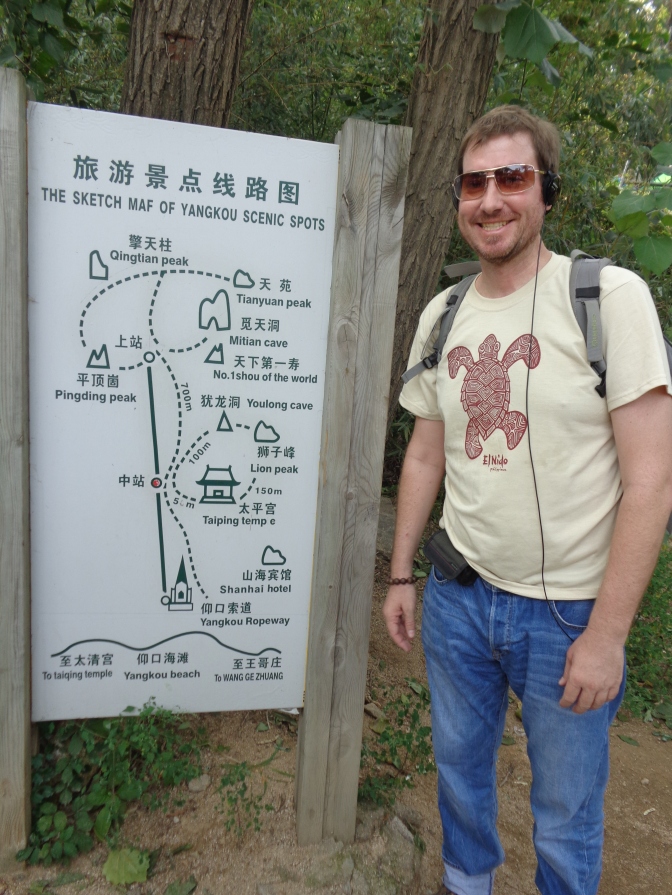 Here is the area from the distance of the local city. 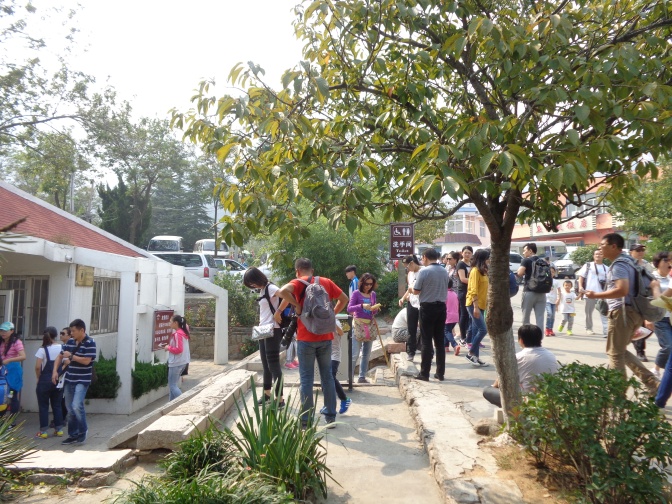 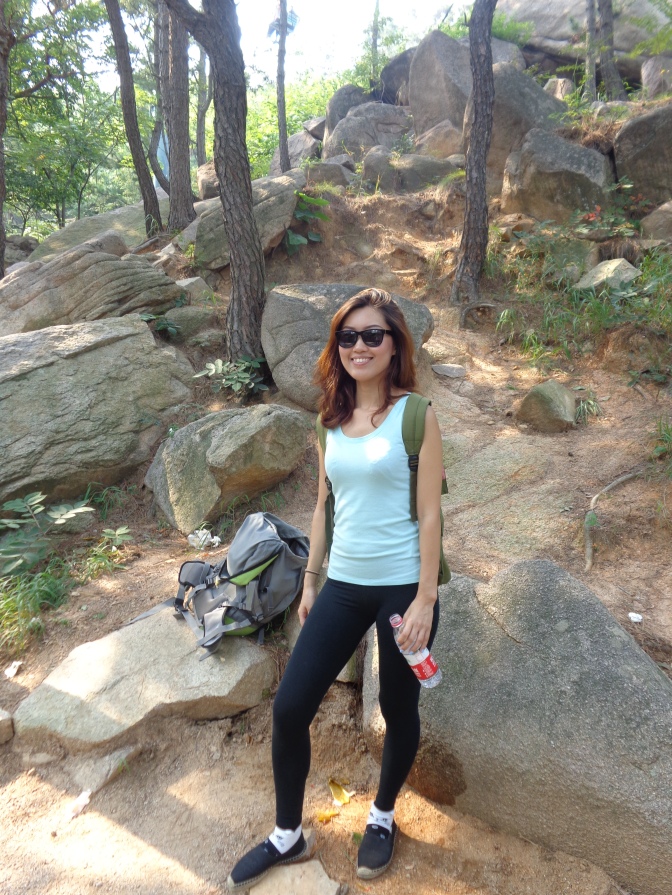 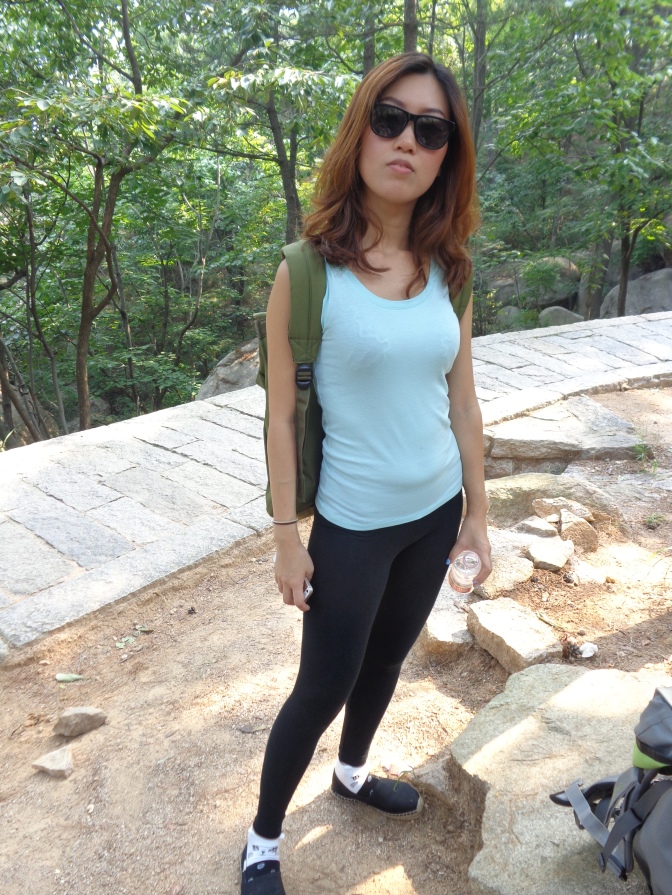 Going up through the rocks!

Well, let’s just have lunch under the rocks. 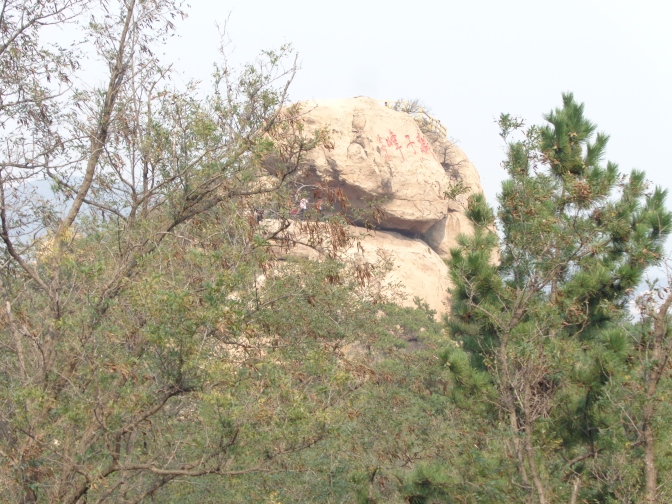 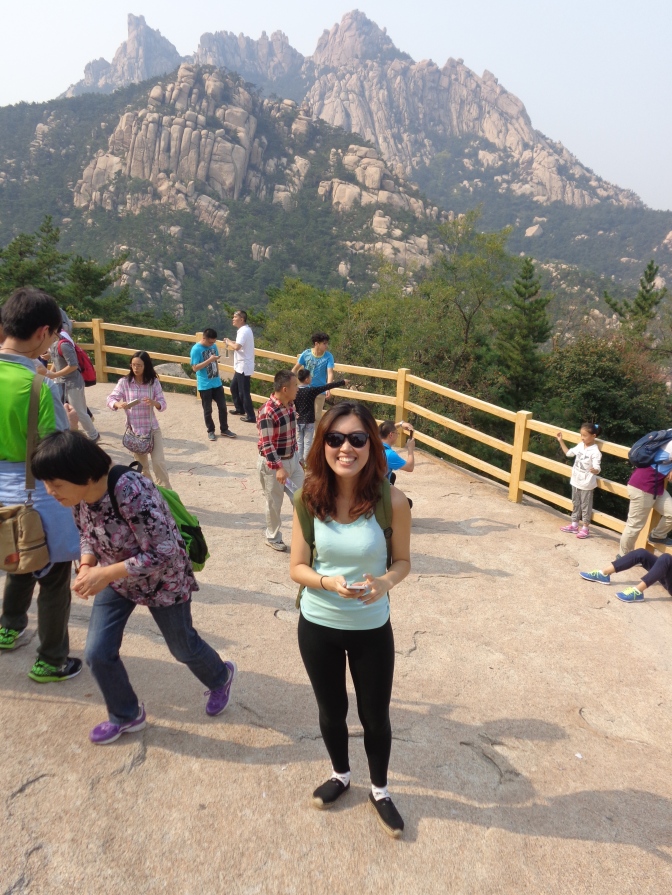 On the way home! 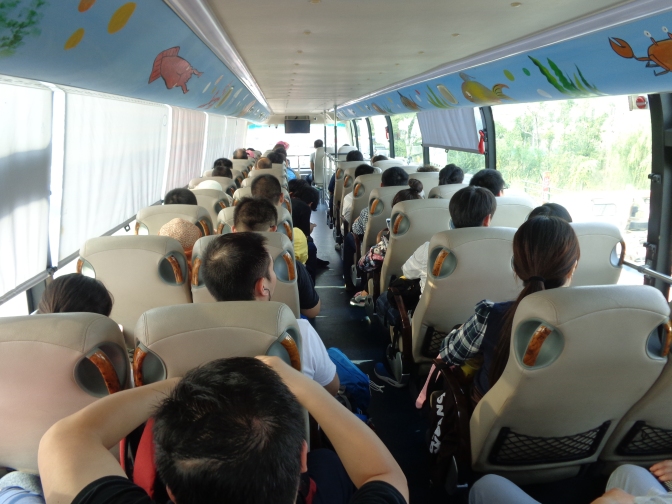 Nothing wrong with hanging out on the back of the bus. 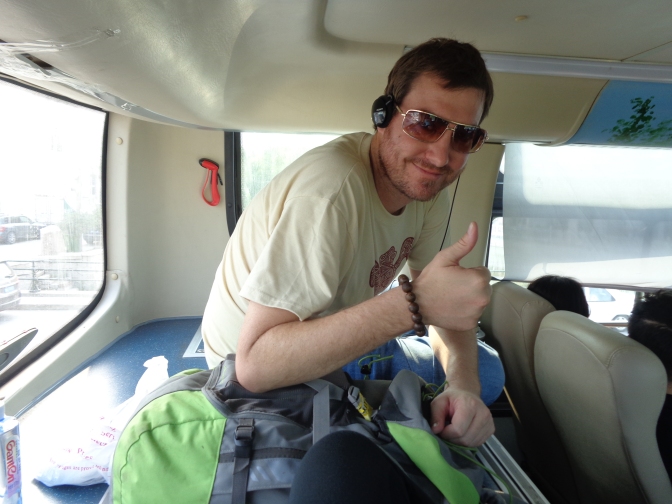 Stay tuned for the next synopsis of the adventures of Aimee and Ross throughout China.   In the next post, we will hike to very top of China’s most ancient and sacred mountains, Tai Shan.